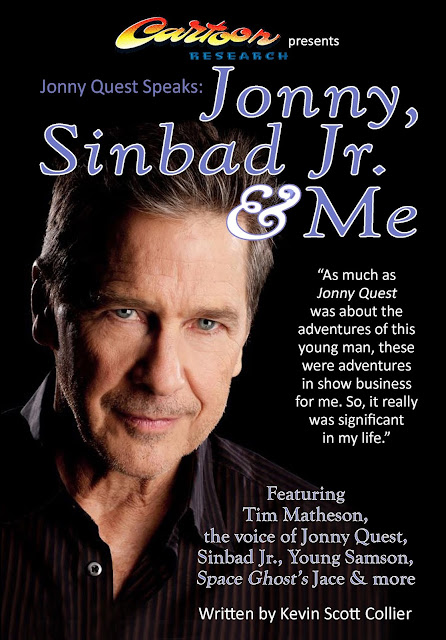 A New Book Presented by

The voice of Jonny Quest, Sinbad Jr., Young Samson and Jace of Space Ghost. Mr. Matheson speaks about his youthful cartoon career at Hanna-Barbera and the experience he learned and people he met. The book is 60 pages, and retails for $8.95.

LISTEN TO AUDIO FROM THE INTERVIEW

The Making of the Book
by Kristen Collier
Editor, and wife of the author

History is personal in the best of times. So, while I normally only edit Kevin’s books, this one is different, hence, the raison d'être for this preface.

I transcribed the following Tim Matheson quotes an hour after his interview, from 1 to 9pm. Eight hours for a 1 hour interview.

Why? In order to be historically accurate I wanted extreme fidelity to Tim’s words, and also wanted to be sure I did not accidentally transpose, or write, an incorrect word.

I couldn’t wait to hear what he had to say about Hanna-Barbera, in my mind, creators of the greatest cartoons the world has ever known (I love Squiddly Diddly so much, that not only has Kevin bought me a collector’s toy and the Secret Squirrel series, but years ago he even created a blue-ringed octopus character for me, for our kid’s show).

Of course, I love Tim’s work, especially in Burn Notice, but I just thought he was an “everyman” type. Boy, was I wrong. And quite surprised by what I learned of the man, the human being.

That, to me, is mind-boggling.

Because, being 48, I do know that Disney was based on a person. I remember seeing Walt on TV, but cannot recall seeing any people from Hanna-Barbera.

So, to hear the following stories from Tim was just amazing as I carefully typed each word. I would stop and start each sentence again, and again, and again. Hence, was delighted to see that he is much more than what I realized.

If I could sum up Tim Matheson from what I learned in a few words:

In fact, as I was transcribing the interview, I started to think 2 things:

Why do I say this? Because as I spent all day transcribing the interview, and listening to each word, playing each sentence back and forth, again and again, I began to notice that he would often start a sentence, only to stop, and begin again. I’m embarrassed to say my first thought was, Boy, this guy is not too articulate for someone who makes a living speaking. But then I realized just how wrong I was - he was doing this because he was extremely careful to “put the best construction on everything,” is the only way I can describe it, in the way I learned it as a child, from the words of Martin Luther.

And it wasn’t due to a lack of brain power, because I actually had to look up at least one word (“sonorous”), and in the 7th grade I had a college sophomore vocab, so rarely come across new words. Tim also had a great reference to “Dover” you’ll read about that belies his “everyman” roles.

I can see why he was chosen to play Ronnie. I will never forget seeing Gorbachev at the president’s funeral, because he was like my dad, who knows someone everywhere he goes. After listening carefully to the words of Tim Matheson, I believe he is the same. Loved by everyone he knows.

Posted by Kevin Collier at 9:53 AM No comments: